The below diagram (Figure 1) shows how zoning of an open office of 1,800sqft with windows on one wall would look like under the 2021 IECC requirements. 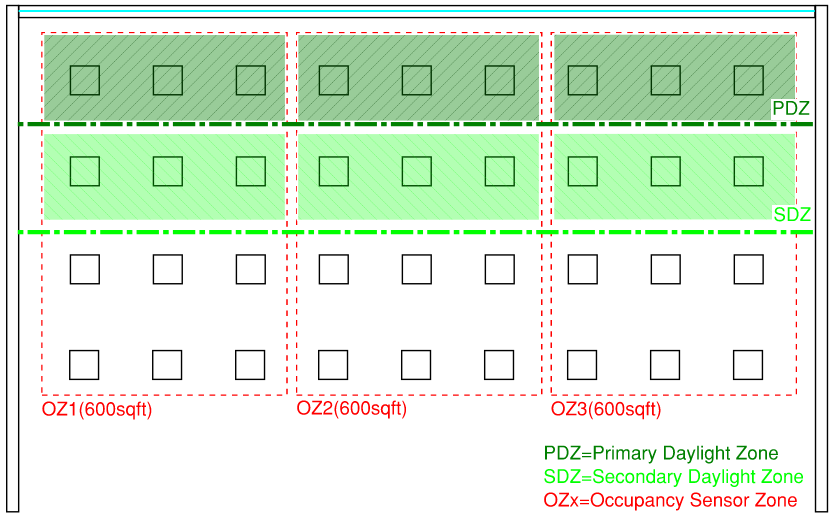 In 2015 IECC, the same open office space in Figure 1 would be able to be controlled with just two zones utilizing nothing more than two relays in a relay panel and a photocell for the single daylight zone with an override switch for no more than every 5,000sqft. Shoot forward to 2021 and the same space requires nine relays, occupancy sensors, daylight sensors and switches for each of the nine zones in the space, and that doesn’t even address the plug load controls! The main reason for this is because every 600sqft needs to be controlled independently by occupancy sensors, and each occupancy sensor zone must have the daylighting controls in that zone act independently of the other occupancy sensor zones. Although each occupancy sensor zone in the space above likely does not have over 150W of artificial light in either the primary or secondary zones on its own, collectively the open office space does exceed that wattage and that is how the calculation needs to be made. There are no exceptions for that in the current code.

Operation of the occupancy sensor zones in an open office can be done in a couple of different ways, allowing for some flexibility in how the space acts as a whole. At the minimum, each of the 600sqft zones must turn lights on independently and turn them all the way off after no more than 20 minutes to meet code requirements. In order to allow an open office to look uniformly lit while still conserving energy, the code has allowed for any one zone being occupied to trigger the other zones on to no more than 20% as well until they also become individually occupied allowing each one to go to 100% independently. As each zone becomes vacant for 20 minutes, the lights must reduce to at least 20% or more (yes, OFF is more) in that specific zone. After the open office as a whole has been vacant (no occupancy in any of the zones) for 20 minutes, all lights must turn all the way off. The code does not require the 20% minimums but rather allows for them in order to uniformly light a space and controls to meet this sequence would have to allow for multiple occupancy sensor time-out settings and be networked together for that to work. Most systems on the market do not have the if/then logic in order to operate in such a way and this is where schedule based controls come into play as an exception.

The time based control exception, as defined under section C405.2.2.1, might be easily misinterpreted to apply to open office controls as a whole and trigger assumption that open offices do not need occupancy sensors at all as long as they comply with the time based section, but that is not the case. The exception specifically applies to section C405.2.1.3.3 and not to C405.2.1.3 as a whole. This means that an open office can be programmed such that any occupancy sensor in the space would turn on the lights to 20% for the whole open office, and lights can stay at 20% for the duration of the workday and rely on a schedule to turn the lights all the way off at the end of business rather than depending on occupancy sensors to turn lights off after 20 minutes. Turning the lights on to 100% in any one zone during that time period can be achieved with individual switch stations. This approach makes the most sense and opens up more control options and it’s also more fitting for plug load controls.

The plug load control requirement for open offices is defined as having to control 25% of all modular furniture receptacles either by occupancy sensors or via a time of day schedule. Following the occupancy sensor approach for open offices to control plug loads just doesn’t seem to make as much sense since the plug loads would have to be shut off any time one of the zones becomes vacant for more than 20 minutes which can be disruptive in an open office environment. You would also need to have an equal amount of plug load power packs or room controllers for each circuit of plug loads, and that can drive the cost. One solution might be to keep lights on occupancy sensors and plug loads on schedule based controls either through a relay panel or split breaker panel controlled by a schedule, but this would mean that your lighting and plug loads work completely independently of one another. A better approach might be to partially use schedule based controls for both lighting and plug loads since we already determined that having schedule based controls for lighting is beneficial to begin with in order to achieve more uniform lighting. When taking this approach, the controls sequence can be utilizing occupancy sensors to turn the lights on in the entire office to 20%, a switch on the wall to turn on lighting zones to 100%, and have the plug loads become active for the entire open office space of no more than 5,000sqft via occupancy sensors at the same time as the lighting. At the end of the business day, both the lighting loads and plug loads would be turned off together thereby decreasing disruptions to occupants throughout the workday. This can be achieved simply by using normal hours and afterhours schedules and assigning a single relay in a relay panel or networked room controller to run coils of contactors that control multiple receptacle circuits which will reduce overall cost and complexity of the system.

As in-fixture controls become more available, a similar approach to the above controls scenario can be taken using networked in-fixture sensors and a networked relay for control of plug load circuits through contactors. The in-fixture sensors and plug load controller(s) would have to be networked together to some form of a front end for schedule-based functions. In-fixture options will reduce the amount of wiring and hardware installed outside of the fixtures and offer more flexibility in terms of final zoning arrangements. The in-fixture controls can be either wireless or wired, with the wired option simply needing a patch cable between the fixtures in the space and the controller for the plug loads. In either case, each individual fixture can be reprogrammed and rearranged as part of a different control zone without rewiring, adding on to the flexibility of the system.

There are a lot of new demands for controls of open offices, so there will be new creative ways to address them in the coming years. Together, we will continue to innovate and advocate for simplicity while meeting energy savings and satisfying our customers.

This article was written by Mike Bogomolov, our Controls Engineering Supervisor. Mike can be reached at 720.904.8537 or mike@mhlighting.com.