Every three years we look forward to what the International Code Council will come up with for the new iteration of the International Energy Conservation Code. At the end of January 2021, the latest version of the IECC was published and made available, and it is very likely that this 2021 code will be incorporated locally in the upcoming months, so let’s get ready! One of the big goals of the 2021 energy code is to increase energy savings by at least 10% over those possible under the 2018 IECC. With the slew of changes implemented, this likely will be achievable. Unlike the changes we witnessed when we jumped from 2015 IECC to 2018 IECC, which only had a few major updates, the 2021 IECC is considerably more impactful on lighting controls. We will focus on four main categories that carry the biggest impacts—occupancy sensors, daylight sensors, and completely new to the IECC, plug load controls and parking garage controls.

There have been a couple of major changes that surround the occupancy sensor portion of the code. Below is a summary and code section reference for each:

The requirements for daylight responsive controls have moved closer to resembling those of Ashrae 90.1 and Title 24. Below are the new requirements, their code sections, and calculation diagrams. 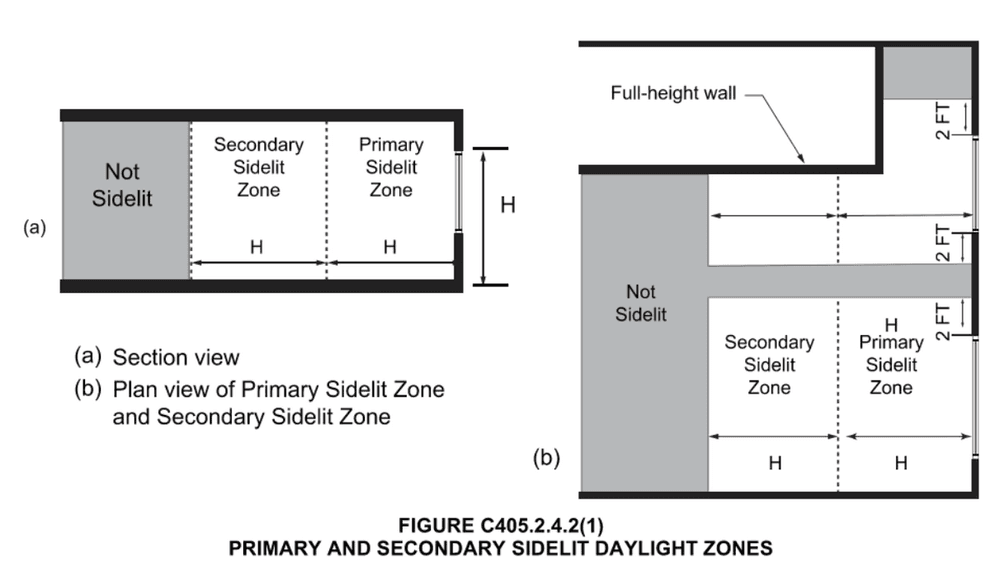 Roof fenestration and roof monitor zones still only have the primary zone requirements. Please note that the daylight responsive controls section is rather lengthy and intricate and has a lot of exceptions that need to be reviewed carefully.

Much like the new daylight control requirements, the plug load requirements now mirror what Ashrae 90.1 has required for some time now. At least 50% of all 125V 15 and 20AMP permanently installed receptacles in enclosed offices, conference rooms, copy/print rooms, breakrooms, classrooms, and individual work stations, including those installed in modular partitions and module office workstations, must be switched off either via one of three methods listed below. In addition, 25% of all modular furniture receptacles not shown on the construction documents must also be automatically switched off. Receptacles can either be split controlled or controlled in their entirety as long they are not located more than 12” away from uncontrolled receptacles.

Exceptions include the below:

Parking garage controls have always been a grey area in the IECC but the 2021 iteration has accepted the Ashrae 90.1 approach to lighting controls in garage spaces and now requires the following:

There you have it! We have touched on the big points of the 2021 IECC changes that are bound to be part of future discussions. Although the 2021 code has a few other changes not listed in this article, the ones mentioned here will have the biggest impact and pertain specifically to lighting controls. As always, don’t hesitate to contact the controls team at MH for further information, or to review specific applications. And remember, whenever you have a technical controls question, on any project or application, simply email controls@mhlighting.com. This email address is monitored by our entire controls team. During our normal business hours, we are committed to a four-hour response time for all emails sent to this email address!

This article was written by Mike Bogomolov, our Controls Engineering Supervisor. Mike can be reached at 720.904.8537 or mike@mhlighting.com.

The text in red has been updated for clarity and accuracy and varies from when this article was originally published on March 25, 2021.